Is it Legal to Use My Phone at a Stoplight? 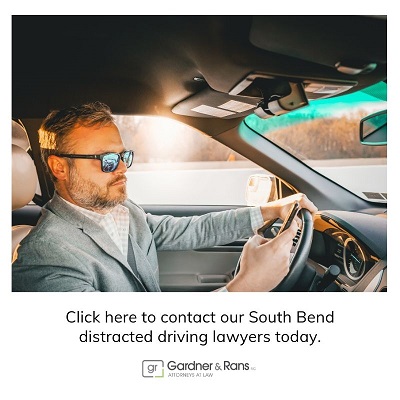 Indiana's Distracted Driving Law makes it illegal for drivers to type, send, or read text messages and emails, even if you're stopped at a traffic light or stop sign. It also prohibits drivers under the age of 18 from using a cell phone under any circumstances, including talking and hands-free use.

If you were injured in a car accident because another motorist was texting and driving, you could be left with physical, mental, emotional, and financial injuries. At Gardner & Rans P.C., our South Bend car accident attorneys will fight for justice on your behalf and pursue the compensation you deserve. This blog breaks down why it's illegal to use your phone at a stoplight, why any cell phone use behind the wheel is dangerous, and how local and state laws may change in the future.

Why Can't I Text at a Stoplight?

Texting at a stoplight is just as dangerous as texting while your car is in motion. This is because of a phenomenon called latency. Latency is the time it takes your brain to re-engage with driving after you look at your phone. This affects you whether you're moving or stopped.

Your brain takes an average of 27 seconds to focus back on driving after you look away from your phone. And when the average driver looks at their phone, they take their eyes off the road for 3-5 seconds. That means that every time you look at your phone, you're taking your mind off driving for at least 30 seconds. So, even if you’re halted at a stoplight or stop sign, your brain won’t be focused by the time you start moving.

Why Can’t Teens Use Their Phones While Driving?

Even if you’re not looking at your screen, any phone use while driving is dangerous. Human brains are not capable of multitasking at the level needed to have a conversation and drive safely at the same time. Are you able to concentrate on reading a book or watching a movie while you talk on the phone? It’s impossible to devote sufficient brainpower to both. The same is true for driving.

For this reason, teens under the age of 18 aren’t allowed to use their cell phones at all while driving in Indiana.

Cell phone laws may soon change at the Indiana state level and the local level in South Bend. A bill in the Indiana House of Representatives would make holding any “wireless communications device” while driving illegal. That would effectively outlaw drivers from having cell phone conversations, changing the music, or inputting GPS directions. The bill would also ban recording or viewing videos and images while driving.

Meanwhile, the South Bend Common Council is considering a similar proposal that would ban drivers from holding cell phones. That practice is already illegal in South Bend school zones.

Distracted driving is a reckless practice that can hurt or kill innocent people. If you or a loved one were injured by a driver who was texting or talking on their cell phone, the attorneys at Gardner & Rans P.C. will help you pursue the compensation you deserve.

How to recognize the signs of traumatic brain injury

Can I Claim Compensation for an Accident That Was My Fault?

What to Do When You're Hit by an Uninsured Driver

Could Shutting Off Cell Phones in Company Cars Start a Trend?

Is it Legal to Use My Phone at a Stoplight?

Why seniors are more likely to slip and fall

Do I Need a Lawyer if the Car Accident Wasn't My Fault?

How Alcohol Impairs a Driver

Watch out for Indiana drivers talking on cell phones!

How Long do I Have to File a Personal Injury Claim?

The Dangers of Night Driving

The Problem Of Latency In Texting And Driving

Who is at Fault for a Parking Lot Accident?

Five Important Steps to Take After Sustaining an Injury

What are good manufacturing practices?

Children deserve the best possible education after a spine injury

What are the most common types of motorcycle accidents?

Develop good habits to keep yourself from texting and driving

Addressing the financial consequences of a crash

Keeping yourself and others safe when driving a truck

Slip-and-fall injuries: What kind of compensation can I claim?

Is a truck owner responsible for a driver’s accident?

The psychological damage of a spinal cord injury

Common injuries that motorcyclists may experience

How to handle a dog bite incident

Motorcycle accidents: Who is at fault?

What is distracting today’s commercial truckers?

What is the CDL clearinghouse?

What are the top reasons for motorcycle accidents?

The accident that shattered your world

How to avoid a jackknifing accident

Is driving at night more dangerous than daytime driving?

What to know about severe burns

How many people are killed and hurt in work zone accidents?

Motorcycle helmets can save lives

How can a truck driver be disqualified?

Ways to avoid a motorcycle accident

What are the car insurance laws in Indiana?

What Are Your Rights Under Indiana Wrongful Death Law?

Premises Liability: Who is Responsible for My Injuries?

Steps to Take After an Auto Accident

The Dangers of Distracted Driving

How Do You Know If You Have a Personal Injury Case?

Tired? Try Not To Get Behind The Wheel.

Tips for sharing the road with motorcycles

Number one cause of Indiana crashes

Third-party claims after a construction accident

Disclaimer: Official website of Gardner & Rans P.C. The information throughout this law firm website is not intended to be taken as legal advice. The information provided by Gardner & Rans is intended to provide general information regarding comprehensive legal services for clients in and around South Bend, Mishawaka, Granger, Elkhart and La Porte, as well as all other Indiana communities. If you are interested in finding out more about our services, please contact us for a complimentary, no-risk consultation. This website is not intended for viewing or usage by European Union citizens. See our Disclaimer for more information. View our ADA compliance disclosure.